Against All Odds by Kalonzo Musyoka 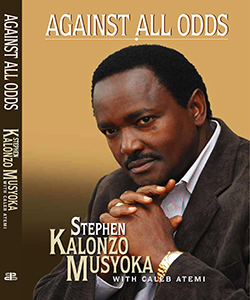 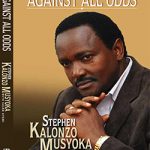 Against All Odds by Kalonzo Musyoka

Brief Summary
AGAINST ALL ODDS: THE STORY OF STEPHEN KALONZO MUSYOKA, is tale of hope, courage, resilience, determination and faith. It is a story of a village boy who rose from the ashes of poverty in the dry, thirsty and forsaken part of rural Kenya into political stardom.
Musyoka, the son of a peasant farmer-cum-shopkeeper, grew up in Mwingi district in Kenya’s Eastern province. His place of birth was and still remains one of the remotest regions in Kenya.
The book tells the story of the journey of his life, so far. It finds its beginnings in the local village in Mwingi, where he was born. It traverses time and space to see him through the village school, high school and university, even as it gives a rendition of the various vicissitudes that informed his formative years.
From there, it travels on to his early experiments with building a career in legal practice, before plunging into the mud of politics, the world of diplomacy and the challenges of statehood and statesmanship.
Being his mother’s only son, Musyoka grew up under the gunfire, and terror of the Shifta bandits. His mother lived in constant fear of witchcraft. The evil eye, she thought, would take her son away.
The biography tells of Musyoka’s struggles to gain meaningful education, overcome poverty and eventual entry into Kenyan politics. It narrates his rise to stardom, trials and tribulations and his strong Christian faith.
It documents his crucial role as a peacemaker since his schooldays. The impact he had on the Sudanese and Somali peace negotiations. His fears, anxieties and survival instincts.
It is a tale of respect for elders. A tale of a man determined to walk the straight path of truthfulness, honesty and integrity. It is a tale of a loving husband and father.
It tells of his loyalty, his desire for a Kenya that is not just God fearing but free from want, poverty, corruption and hunger. His eyes are set on a country whose economy will one day compete with those of the developed world; a country whose people will walk and live free from fear of insecurity; a nation whose people will enjoy a free, high quality education, social security and good health.
The biography details his political ambitions to ascend to Kenya’s presidency; his dreams, his hopes and his aspirations for Kenya.
Caleb Atemi is a renowned writer, communications and public relations consultant. Atemi, a former News Editor with the Nation Media Group and journalism lecturer, is working on other biographies detailing the life and times of prominent Kenyan personalities.