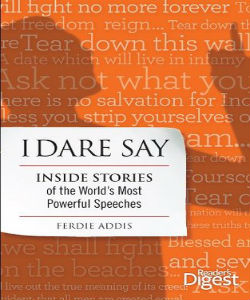 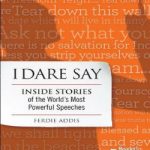 Sticks and stones may break bones, but words can inspire an angry mob to pick up those clubs in the first place. This collection of fifty speeches reveals how men and women throughout the ages changed the course of history.
Featuring classical orators, wartime heroes, and contemporary icons, from Elizabeth I to Abraham Lincoln, from Margaret Thatcher to Nelson Mandela, right up through Barack Obama, I Dare Say: Great Speeches that Changed the World tells the great stories of human history, including:
· The Ancient World: Public speaking became an art in ancient Greece and Rome, and the records of speeches written by philosophers and teachers such as Homer and Cicero form the bedrock for modern philosophical thought and epic literary works.
· European History: The bloody Crusades, fractious divisions among the European powers, and a political philosophy of terror redraw the maps of Europe.
· Early American History: The dynamic speeches that rallied thousands to join arms against their motherland—and their brothers—from the American Revolution to the Civil War.
· Slavery, Suffrage, and Civil Rights: Impassioned and eloquent speeches from luminaries such as Sojourner Truth, Dr. Martin Luther King, Jr., and Hillary Rodham Clinton document the struggle for equal rights that shapes the modern world.
· World Wars I and II: The rallying cries to protect, defend, and conquer that defined the twenty-first century—from both the winners and losers of the great World Wars.
· Colonialism and Apartheid: The calls for peace and equality from leade

Be the first to review “I Dare Say” Cancel reply